As application scientists develop and deploy simulation codes on to leadership-class computing resources, there is a need to instrument these codes to better understand performance to efficiently utilize these resources. This instrumentation may come from independent third-party tools that generate and store performance metrics or from custom instrumentation tools built directly into the application. The metrics collected are then available for visual analysis, typically in the domain in which there were collected. In this paper, we introduce an approach to visualize and analyze the performance metrics in situ in the context of the machine, application, and communication domains (MAC model) using a single visualization tool. This visualization model provides a holistic view of the application performance in the context of the resources where it is executing.

A. Sanderson, A. Humphrey, J. Schmidt, R. Sisneros. “Coupling the Uintah Framework and the VisIt Toolkit for Parallel In Situ Data Analysis and Visualization and Computational Steering,” In High Performance Computing, June, 2018.

Data analysis and visualization are an essential part of the scientific discovery process. As HPC simulations have grown, I/O has become a bottleneck, which has required scientists to turn to in situ tools for simulation data exploration. Incorporating additional data, such as runtime performance data, into the analysis or I/O phases of a workflow is routinely avoided for fear of excaberting performance issues. The paper presents how the Uintah Framework, a suite of HPC libraries and applications for simulating complex chemical and physical reactions, was coupled with VisIt, an interactive analysis and visualization toolkit, to allow scientists to perform parallel in situ visualization of simulation and runtime performance data. An additional benefit of the coupling made it possible to create a "simulation dashboard" that allowed for in situ computational steering and visual debugging.

One of the difficulties researchers face when exploring flow fields is understanding the respective strengths and limitations of the visualization and analysis techniques that can be applied to their particular problem. We consider in this paper the visualization of doubly periodic flow fields. Specifically, we compare and contrast two traditional visualization techniques, the Poincaré plot and the finite-time Lyapunov exponent (FTLE) plot with a technique recently proposed by the authors, which enhances the Poincaré plot with analytical results that reveal the topology. As is often the case, no single technique achieves a holistic visualization of the flow field that would address all the needs of the analysis. Instead, we show that additional insight can be gained from applying them in combination. 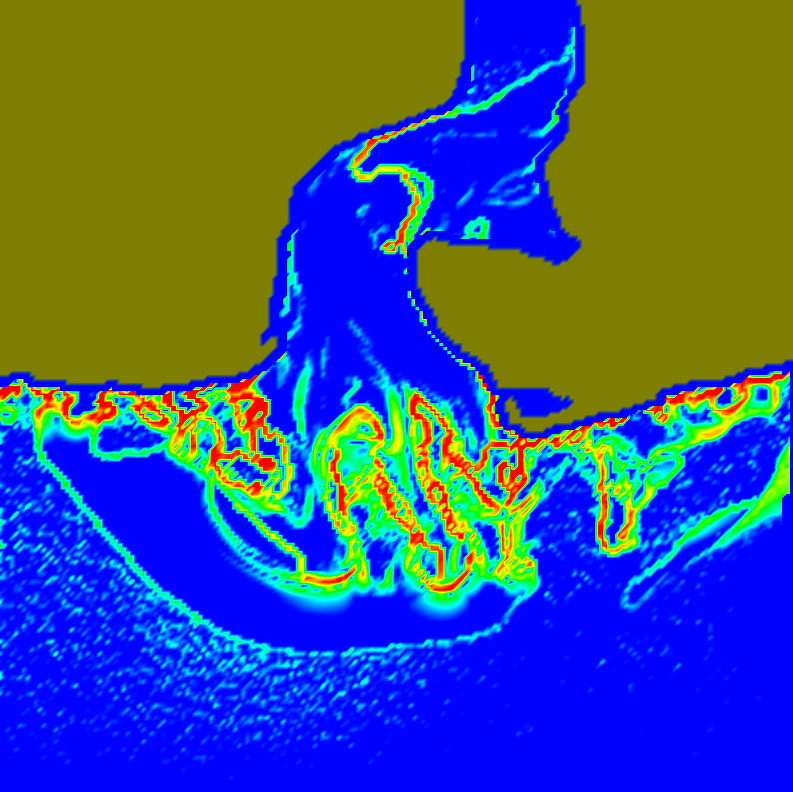 Today scientists are producing large volumes of data that they wish to explore and visualize. In this paper we describe a system that combines range-based queries with fast lookup to allow a scientist to quickly and efficiently ask \"what if?\" questions. Unique to our system is the ability to perform "cumulative queries" that work on both an intra- and inter-time step basis. The results of such queries are visualized as frequency histograms and are the input for secondary queries, the results of which are then visualized.

Area-preserving maps arise in the study of conservative dynamical systems describing a wide variety of physical phenomena, from the rotation of planets to the dynamics of a fluid. The visual inspection of these maps reveals a remarkable topological picture in which invariant manifolds form the fractal geometric scaffold of both quasi-periodic and chaotic regions. We discuss in this paper the visualization of such maps built upon these invariant manifolds. This approach is in stark contrast with the discrete Poincare plots that are typically used for the visual inspection of maps. We propose to that end several modified definitions of the finite-time Lyapunov exponents that we apply to reveal the underlying structure of the dynamics. We examine the impact of various parameters and the numerical aspects that pertain to the implementation of this method. We apply our technique to a standard analytical example and to a numerical simulation of magnetic confinement in a fusion reactor. In both cases our simple method is able to reveal salient structures across spatial scales and to yield expressive images across application domains.

Area-preserving maps are found across a wide range of scientific and engineering problems. Their study is made challenging by the significant computational effort typically required for their inspection but more fundamentally by the fractal complexity of salient structures. The visual inspection of these maps reveals a remarkable topological picture consisting of fixed (or periodic) points embedded in so-called island chains, invariant manifolds, and regions of ergodic behavior. This paper is concerned with the effective visualization and precise topological analysis of area-preserving maps with two degrees of freedom from numerical or analytical data. Specifically, a method is presented for the automatic extraction and characterization of fixed points and the computation of their invariant manifolds, also known as separatrices, to yield a complete picture of the structures present within the scale and complexity bounds selected by the user. This general approach offers a significant improvement over the visual representations that are so far available for area-preserving maps. The technique is demonstrated on a numerical simulation of magnetic confinement in a fusion reactor.

Allen R. Sanderson, Scott Kruger, and Stephane Either. “Visualization and Analysis Tools for Assisting in Evaluating Fusion Simulations,” In Proceedings of the Sherwood Fusion Theory Conference, 2010.

One of the central challenges facing visualization research is how to effectively enable knowledge discovery. An effective approach will likely combine application architectures that are capable of running on today's largest platforms to address the challenges posed by large data with visual data analysis techniques that help find, represent, and effectively convey scientifically interesting features and phenomena.