We consider the inverse electrocardiographic problem of computing epicardial potentials from a body-surface potential map. We study how to improve numerical approximation of the inverse problem when the finite-element method is used. Being ill-posed, the inverse problem requires different discretization strategies from its corresponding forward problem. We propose refinement guidelines that specifically address the ill-posedness of the problem. The resulting guidelines necessitate the use of hybrid finite elements composed of tetrahedra and prism elements. Also, in order to maintain consistent numerical quality when the inverse problem is discretized into different scales, we propose a new family of regularizers using the variational principle underlying finite-element methods. These variational-formed regularizers serve as an alternative to the traditional Tikhonov regularizers, but preserves the L2 norm and thereby achieves consistent regularization in multiscale simulations. The variational formulation also enables a simple construction of the discrete gradient operator over irregular meshes, which is difficult to define in traditional discretization schemes. We validated our hybrid element technique and the variational regularizers by simulations on a realistic 3-D torso/heart model with empirical heart data. Results show that discretization based on our proposed strategies mitigates the ill-conditioning and improves the inverse solution, and that the variational formulation may benefit a broader range of potential-based bioelectric problems. 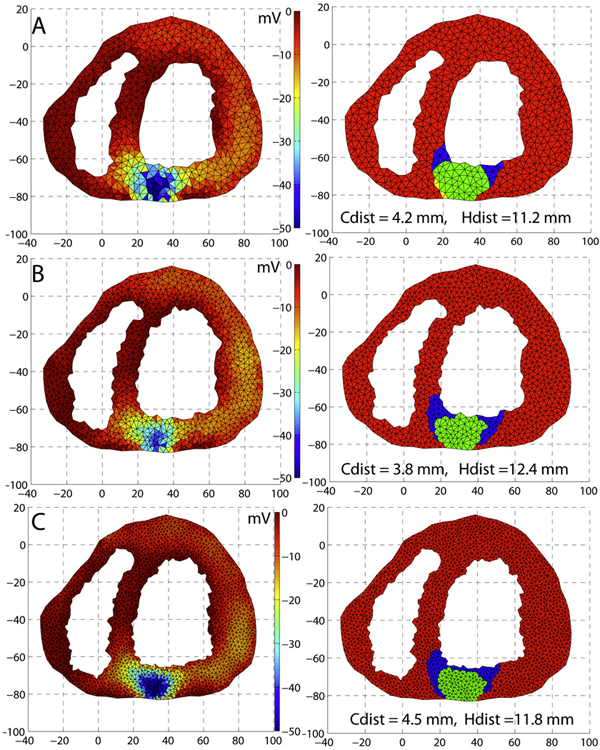 By combining a static bidomain heart model with a torso conduction model, we studied the inverse electrocardiographic problem of computing the transmembrane potentials (TMPs) throughout the myocardium from a body-surface potential map, and then used the recovered potentials to localize myocardial ischemia. Our main contribution is solving the inverse problem within a constrained optimization framework, which is a generalization of previous methods for calculating transmembrane potentials. The framework offers ample flexibility for users to apply various physiologically-based constraints, and is well supported by mature algorithms and solvers developed by the optimization community. By avoiding the traditional inverse ECG approach of building the lead-field matrix, the framework greatly reduces computation cost and, by setting the associated forward problem as a constraint, the framework enables one to flexibly set individualized resolutions for each physical variable, a desirable feature for balancing model accuracy, ill-conditioning and computation tractability. Although the task of computing myocardial TMPs at an arbitrary time instance remains an open problem, we showed that it is possible to obtain TMPs with moderate accuracy during the ST segment by assuming all cardiac cells are at the plateau phase. Moreover, the calculated TMPs yielded a good estimate of ischemic regions, which was of more clinical interest than the voltage values themselves. We conducted finite element simulations of a phantom experiment over a 2D torso model with synthetic ischemic data. Preliminary results indicated that our approach is feasible and suitably accurate for the common case of transmural myocardial ischemia.

We present a particle-based approach for generating adaptive triangular surface and tetrahedral volume meshes from CAD models. Input shapes are treated as a collection of smooth, parametric surface patches that can meet non-smoothly on boundaries. Our approach uses a hierarchical sampling scheme that places particles on features in order of increasing dimensionality. These particles reach a good distribution by minimizing an energy computed in 3D world space, with movements occurring in the parametric space of each surface patch.

Rather than using a pre-computed measure of feature size, our system automatically adapts to both curvature as well as a notion of topological separation. It also enforces a measure of smoothness on these constraints to construct a sizing field that acts as a proxy to piecewise-smooth feature size. We evaluate our technique with comparisons against other popular triangular meshing techniques for this domain.

In this paper, we present a sample-based approach for surface coloring, which is independent of the original surface resolution and representation. To achieve this, we introduce the Orthogonal Fragment Buffer (OFB)-an extension of the Layered Depth Cube-as a high-resolution view-independent surface representation. The OFB is a data structure that stores surface samples at a nearly uniform distribution over the surface, and it is specifically designed to support efficient random read/write access to these samples. The data access operations have a complexity that is logarithmic in the depth complexity of the surface. Thus, compared to data access operations in tree data structures like octrees, data-dependent memory access patterns are greatly reduced. Due to the particular sampling strategy that is employed to generate an OFB, it also maintains sample coherence, and thus, exhibits very good spatial access locality. Therefore, OFB-based surface coloring performs significantly faster than sample-based approaches using tree structures. In addition, since in an OFB, the surface samples are internally stored in uniform 2D grids, OFB-based surface coloring can efficiently be realized on the GPU to enable interactive coloring of high-resolution surfaces. On the OFB, we introduce novel algorithms for color painting using volumetric and surface-aligned brushes, and we present new approaches for particle-based color advection along surfaces in real time. Due to the intermediate surface representation we choose, our method can be used to color polygonal surfaces as well as any other type of surface that can be sampled.

BACKGROUND:
Total subcutaneous implantable subcutaneous defibrillators are in development, but optimal electrode configurations are not known.

RESULTS:
A total of 122 single-electrode/array configurations and 28 dual-electrode configurations were simulated. Pseudo-DFTs for single-electrode orientations ranged from 0.60 to 16.0 (mean 2.65 +/- 2.48) times that predicted for the base case, an anterior-posterior configuration recently tested clinically. A total of 32 of 150 tested configurations (21%) had pseudo-DFT ratios /=1, indicating the possibility of multiple novel, efficient, and clinically relevant orientations. Favorable alignment of lead-generator vector with ventricular myocardium and increased lead length were the most important factors correlated with pseudo-DFT, accounting for 70% of the predicted variation (R(2) = 0.70, each factor P < .05) in a combined general linear modl in which parameter estimates were calculated for each factor.

CONCLUSION:
Further exploration of novel and efficient electrode configurations may be of value in the development of the S-ICD technologies and implant procedure. FEM modeling suggests that the choice of configurations that maximize shock vector alignment with the center of myocardial mass and use of longer leads is more likely to result in lower DFT.

In this paper we present a novel approach to generate proxy geometry for slice based volume rendering. The basic idea is derived from the behavior of a ray-caster and is a simple extension of the well known 2D object-aligned texture stack based technique. From this our novel scheme inherits the advantage that it enables hardware-based volume rendering for devices that do not support 3D textures. On these devices previous object-aligned 2D texture based approaches suffered from disturbing view angle dependent stack-switching artifacts which are avoided by our novel method. Our approach also shows benefits compared to the widely used view aligned slicing algorithm as it avoids jagged boundary artifacts and increases performance.