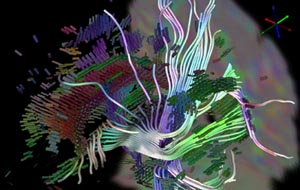 Diffusion tensor MRI visualization is a growing field of research. The scanners are collecting better data all the time, and doctors and scientists are constantly discovering new applications for this data. However, unlike scalar and vector data, high-dimensional tensors are not always intuitive to visualize. When devising new strategies for DT-MRI visualization, it is important to understand both what exactly it is that is being measured and what insights the doctors and scientists are hoping to gain from the data.

The success of diffusion magnetic resonance imaging (MRI) is deeply rooted in the powerful concept that during their random, diffusion-driven displacements, molecules probe tissue structure at a microscopic scale well beyond the usual image resolution. As diffusion is truly a three dimensional process, molecular mobility in tissues may be anisotropic, as in brain white matter. With diffusion tensor imaging (DTI), diffusion anisotropy effects can be fully extracted, characterized, and exploited, providing even more exquisite details on tissue microstructure. The most advanced application is certainly that of fiber tracking in the brain, which, in combination with functional MRI, might open a window on the important issue of connectivity. DTI has also been used to demonstrate subtle abnormalities in a variety of diseases (including stroke, multiple sclerosis, dyslexia, and schizophrenia) and is currently becoming part of many routine clinical protocols.

BioTensor is a program that processes and visualizes diffusion tensor images. It can read diffusion weighted images (DWIs), perform correction for a common class of distortions in echo-planar imaging (EPI registration), estimate tensors from DWIs, and visualize the diffusion tensor field. BioTensor's functionality is easily extended. Future versions will have expanded capabilities based on contributions from external collaborators and internal development.


Diffusion weighted imaging uses the diffusion of water molecules to probe the directional micro-structure of living tissue. A single diffusion weighted image generally measures diffusivity of water molecules along a particular direction. The amount of diffusion along a direction is detected by destructive interference of different phase signatures created by the magnetic gradient. A large set of DWIs along carefully chosen gradient directions permits estimation of a diffusion tensor that models the relationship between direction and diffusivity. The BioTensor application generates "diffusion tensor images" (DTIs) from DWIs. DTIs are three-dimensional fields of tensor values.

An important application of diffusion tensor imaging is determining the connective structure of central nervous tissue, made possible by the directionally constrained diffusion of water within or between the myelinated axon sheaths of white matter. The extent to which diffusion is faster along some directions than others is termed anisotropy; white matter within the brain is more anisotropic than gray matter on its cortical surface.

The visualization capabilities in BioTensor allow the user to:

BioTensor has been integrated with SCIRun since the time of this article.