OBJECTIVE:
Transcranial direct current stimulation (tDCS) aims to alter brain function non-invasively via electrodes placed on the scalp. Conventional tDCS uses two relatively large patch electrodes to deliver electrical current to the brain region of interest (ROI). Recent studies have shown that using dense arrays containing up to 512 smaller electrodes may increase the precision of targeting ROIs. However, this creates a need for methods to determine effective and safe stimulus patterns as the number of degrees of freedom is much higher with such arrays. Several approaches to this problem have appeared in the literature. In this paper, we describe a new method for calculating optimal electrode stimulus patterns for targeted and directional modulation in dense array tDCS which differs in some important aspects with methods reported to date.

APPROACH:
We optimize stimulus pattern of dense arrays with fixed electrode placement to maximize the current density in a particular direction in the ROI. We impose a flexible set of safety constraints on the current power in the brain, individual electrode currents, and total injected current, to protect subject safety. The proposed optimization problem is convex and thus efficiently solved using existing optimization software to find unique and globally optimal electrode stimulus patterns.

MAIN RESULTS:
Solutions for four anatomical ROIs based on a realistic head model are shown as exemplary results. To illustrate the differences between our approach and previously introduced methods, we compare our method with two of the other leading methods in the literature. We also report on extensive simulations that show the effect of the values chosen for each proposed safety constraint bound on the optimized stimulus patterns.

SIGNIFICANCE:
The proposed optimization approach employs volume based ROIs, easily adapts to different sets of safety constraints, and takes negligible time to compute. An in-depth comparison study gives insight into the relationship between different objective criteria and optimized stimulus patterns. In addition, the analysis of the interaction between optimized stimulus patterns and safety constraint bounds suggests that more precise current localization in the ROI, with improved safety criterion, may be achieved by careful selection of the constraint bounds.

Algorithms for fully automatic segmentation of images are often not sufficiently generic with suitable accuracy, and fully manual segmentation is not practical in many settings. There is a need for semiautomatic algorithms, which are capable of interacting with the user and taking into account the collected feedback. Typically, such methods have simply incorporated user feedback directly. Here, we employ active learning of optimal queries to guide user interaction. Our work in this paper is based on constrained spectral clustering that iteratively incorporates user feedback by propagating it through the calculated affinities. The original framework does not scale well to large data sets, and hence is not straightforward to apply to interactive image segmentation. In order to address this issue, we adopt advanced numerical methods for eigen-decomposition implemented over a subsampling scheme. Our key innovation, however, is an active learning strategy that chooses pairwise queries to present to the user in order to increase the rate of learning from the feedback. Performance evaluation is carried out on the Berkeley segmentation and Graz-02 image data sets, confirming that convergence to high accuracy levels is realizable in relatively few iterations. 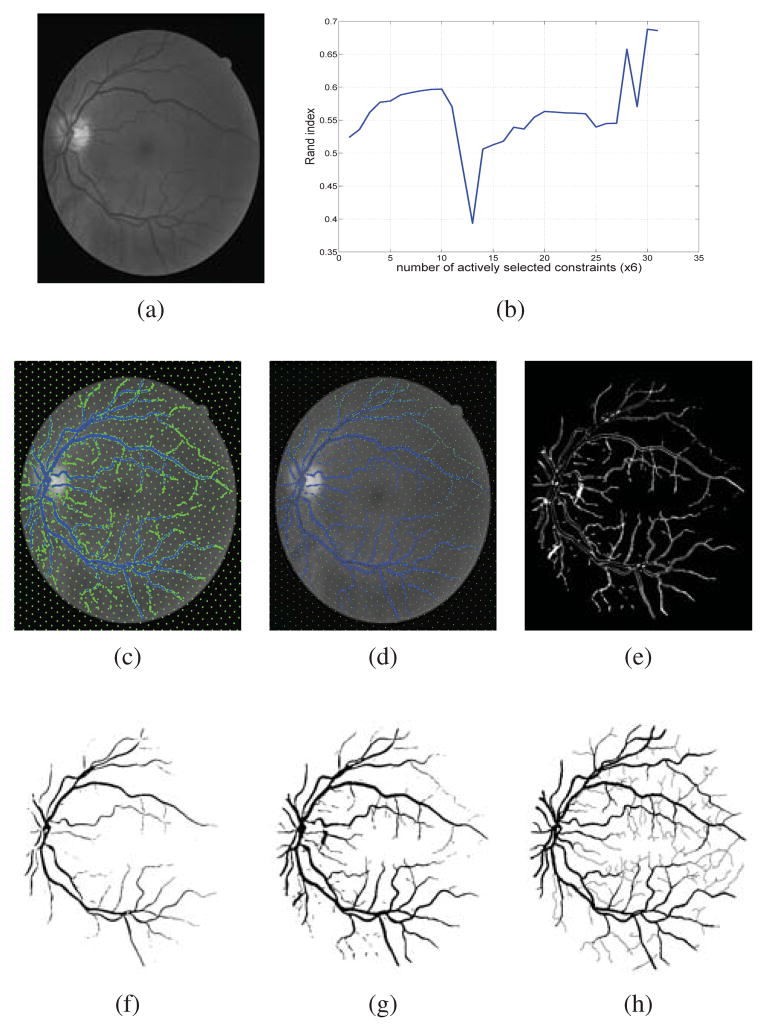 Constrained spectral clustering with affinity propagation in its original form is not practical for large scale problems like image segmentation. In this paper we employ novelty selection sub-sampling strategy, besides using efficient numerical eigen-decomposition methods to make this algorithm work efficiently for images. In addition, entropy-based active learning is also employed to select the queries posed to the user more wisely in an interactive image segmentation framework. We evaluate the algorithm on general and medical images to show that the segmentation results will improve using constrained clustering even if one works with a subset of pixels. Furthermore, this happens more efficiently when pixels to be labeled are selected actively.

Reflectance Confocal Microscopic (RCM) imaging of obliquely-oriented optical sections, rather than with traditional z-stacks, shows depth information that more closely mimics the appearance of skin in orthogonal sections of histology. This approach may considerably reduce the amount of data that must be acquired and processed. However, as with z-stacks, purely visual detection of the dermal-epidermal junction (DEJ) in oblique images remains challenging. Here, we have extended our original algorithm for localization of DEJ in z-stacks to oblique images. In addition, we developed an algorithm for detecting wrinkles, which in addition to its intrinsic merit, gives useful information for DEJ detection. 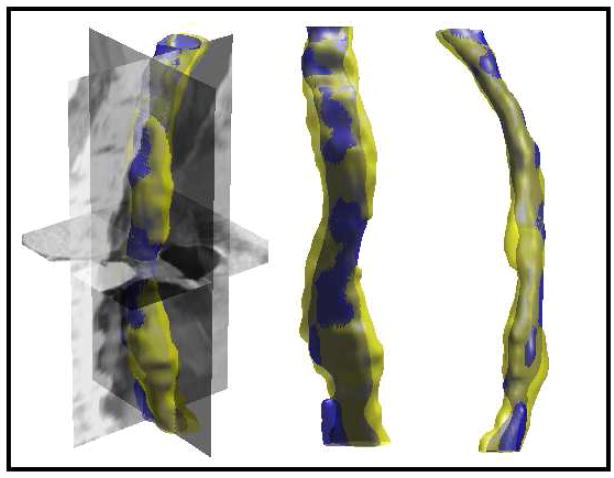 For radiotherapy planning, contouring of target volume and healthy structures at risk in CT volumes is essential. To automate this process, one of the available segmentation techniques can be used for many thoracic organs except the esophagus, which is very hard to segment due to low contrast. In this work we propose to initialize our previously introduced model based 3D level set esophagus segmentation method with a principal curve tracing (PCT) algorithm, which we adapted to solve the esophagus centerline detection problem. To address challenges due to low intensity contrast, we enhanced the PCT algorithm by learning spatial and intensity priors from a small set of annotated CT volumes. To locate the esophageal wall, the model based 3D level set algorithm including a shape model that represents the variance of esophagus wall around the estimated centerline is utilized. Our results show improvement in esophagus segmentation when initialized by PCT compared to our previous work, where an ad hoc centerline initialization was performed. Unlike previous approaches, this work does not need a very large set of annotated training images and has similar performance.
Powered by Gantry Framework
Copyright © 1998 - 2022 Scientific Computing and Imaging Institute