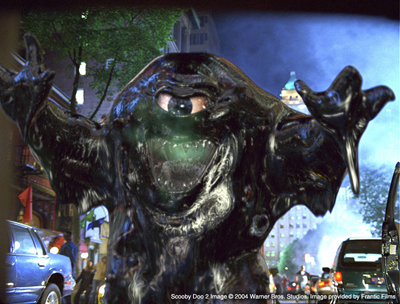 Associate Professor Ross Whitaker and Assistant Professor David Breen (Drexel University) have been developing surface modeling techniques based on level sets. These techniques include efficient algorithms for representing level-set surfaces and a new formulation for deforming one 3D object into another (also called 3D morphing). This combination of technologies provides an easy and efficient way to smoothly transform any 3D object to the shape of a target form. Recently, these methods were adopted by the special effects gurus at Frantic Films to create stunning visual effects for the movie Scooby-Doo 2.

This new morphing approach [Breen and Whitaker, 2001] uses level set methods in which a shape is described by a function that is sequentially optimized based on the object's similarity to the target. Through a series of iterations, these funtions describe a shape that approximates the target in a progressively improving manner, until it converges on the desired target shape. This approach allows users to automatically morph between complex shapes with minimal user input for the initial alignment of the start and target shapes. It also allows for a wide range of user input. This morphing technique relies on the sparse-field algrorithm for representing level sets (Whitaker, 1998), which computes solutions on a very narrow band of grid points near the surface, and maintains these points on a linked list.

Special effects artists at Frantic Films recently employed these technlogies in a film sequence depicting the "Tar Monster". As seen below, they started with a model of a hand and used the level set technique to transform it into the monster. 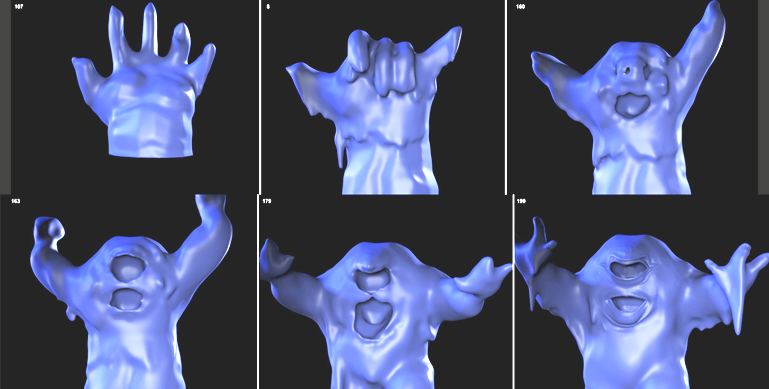 An early test sequence of the Tar Monster morph.

Ben Houston of Frantic Films described the process as follows:

"We used level sets extensively to do both the tar monster and the fluid simulation work. The level set morphing was done between two RLE Sparse Level Sets -- one representing the animated Tar Monster and another representing an animated hand figure. Both level sets at render time where in the +50 million voxel range. We had an alpha parameter which represented the degree of blend between the two objects. At each frame in the blend sequence we moved alpha closer to 1 from the starting point of 0. Thus even though the source and the target were animated the blend looked smooth."

"The level set morphing technique described in the research of David Breen and Ross Whitaker worked beautifully in the two sequences we used it."