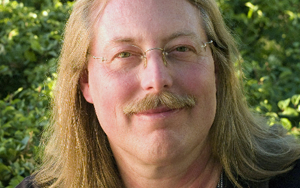 May 7, 2010 -- Christopher R. Johnson, distinguished professor of computer science and director of the Scientific Computing and Imaging (SCI) Institute at the University of Utah, was honored at today's university commencement ceremonies with the Rosenblatt Prize for Excellence, the U's most prestigious award. The $40,000 gift is presented annually to a faculty member who displays excellence in teaching, research and administrative efforts. The Rosenblatt Prize Committee, a group of distinguished faculty members, recommends selected candidates for the award and the university president makes the final selection. U President Michael K. Young presented the award to Johnson, stating, "There is no one who typifies the overall spirit and respected reputation of the Rosenblatt Prize for Excellence more than Chris Johnson. His contributions to the U as a gifted teacher, administrator and world-renowned researcher are invaluable and his work in extending the power and science of computing has quite simply transformed the way we live."

One of the world's foremost researchers and leaders in scientific visualization and scientific computing, Johnson has focused on solving important problems in biomedicine, science and engineering using computation.

In receiving the Rosenblatt prize, Johnson notes, "Since I was young, I've been interested in understanding how individuals accomplish great things. I've learned that the secret is not so much individual talent as persistent hard work and, especially, interdisciplinary teamwork. Over the years, scores of colleagues, staff, students and visionary administrators from different departments and colleges have contributed to the work of the SCI Institute. This award is a tribute to them all."

Johnson is a faculty member of the U's computational engineering and science program, which he helped create and direct, and serves as a faculty member with the U's Brain Institute, where he serves on the advisory board. He is co-founder of one of the U's start-up companies, Visual Influence, Inc., and serves as the co-director for the National Institute of Health (NIH) Center for Integrative Biomedical Computing.

"Chris is inspirational in his scientific creativity because of his ability to integrate techniques and understanding from many fields. His web pages astound any computational scientist who visits them because of the breadth of disciplines involved," said David Keyes, Fu Foundation professor of applied mathematics at Columbia University.

Johnson helped create and direct the Scientific Computing and Imaging Research Group, a world-class institute where researchers work together to solve complex, real-world problems of significance. After being distinguished as a U.S. Department of Energy Visualization Center, a National Institute for Health Research Center and a Utah State Center for Excellence, the group evolved into the U's Scientific Computing and Imaging (SCI) Institute.

Under Johnson's leadership, this group has grown to more than 165 faculty, students and staff and has established itself as an international leader in scientific computing, visualization and imaging.

"In research, Chris has put Utah back on the computer graphics map," remarked James Foley, professor of computer science at Georgia Institute of Technology. "Over the past ten years he has risen to the position of senior spokesperson in the fields of scientific visualization and biomedical computing."

For three years, Johnson directed and taught in the U's Access Program, which focused on bringing the best and brightest students into the U's science and engineering programs. His efforts led to the creation of the Engineering Scholars Program, which rewards academic excellence and continually recruits top engineering students to the university.

"Dr. Johnson's educational achievement has encompassed fifteen years of novel teaching at the very highest levels," said Martin Berzins, director of the School of Computing at the U. "Still, such enumerations of his accomplishments in education do not completely reflect the heart of the matter: that Dr. Johnson has a passionate, deep and unstinting commitment to students, to colleagues and to excellence in education."

He has received numerous awards, including the Governor's Medal for Science and Technology from Governor Michael Leavitt in 1999; the National Science Foundation Presidential Faculty Fellow award from President Clinton in 1995; the NSF National Young Investigator Award in 1994; and the Young Investigator's Award from the National Institute of Health in 1992.

The U has recognized Johnson's excellence in teaching with several awards, including the 1997 Par Excellence Award from the University of Utah Alumni Association and the Presidential Teaching Scholar Award, as well as with the 2003 Distinguished Professor Award.

The Rosenblatt endowment, from which the prize money is drawn, was established in 1983 by the Joseph and Evelyn Rosenblatt family to honor the civic leadership and generosity of Joseph's parents, Nathan and Tillie Rosenblatt, who immigrated to Utah from Russia in the late 19th century.