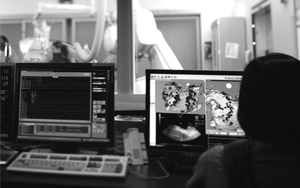 By Rob MacLeod, Professor and Associate Chair of Undergraduate Studies, Department of Bioengineering

Atrial fibrillation is the most common – and perhaps most insidious – form of heart rhythm disturbance, affecting 2.5 million Americans. While usually not life-threatening in its initial stages, the condition can eventually lead to a stroke or heart attack. Finding better ways to treat atrial fibrillation is the focus of a group of bioengineers in the College of Engineering who have teamed up with imaging physicists and physicians in the School of Medicine.

Atrial fibrillation is an irregular heart rhythm in the upper chambers (atria) of the heart that causes it to beat erratically and inefficiently. The disorder reduces the pumping capacity of the heart and elevates heart rate. Patients often cannot be as physically active as they wish, but many adjust to the symptoms and live with the disease untreated for years.

One promising treatment for atrial fibrillation, called atrial ablation, involves using image guidance to place a catheter in the heart that applies radiofrequency energy to heat a series of small lesions on the heart wall. The procedure makes areas of the left atrial wall electrically inactive (or unable to stimulate contractions). By suppressing this part of the heart's electrical activity, the heart returns to normal rhythm.

Although atrial ablation is the only intervention that can permanently suppress atrial fibrillation without the use of supplemental drugs, its use is currently limited. Ablation is performed in only a tiny fraction of cases – less than 0.1 percent – even though it can achieve success rates as high as 70 to 80 percent. The reason for such limited use is mostly technical: the procedure is difficult to execute well, requiring the physician to rely on seeing the heart through an ultrasound probe and to precisely follow a moving target with a device that could burn through the heart if applied too long.

Researchers in the College of Engineering are working with cardiologists and radiology researchers in the School of Medicine to improve the success and safety of atrial ablation through a combination of high-tech interventional therapy, medical imaging, image processing and analysis, and computer science. The interdisciplinary team includes Rob MacLeod and Edward Hsu from the Department of Bioengineering and Department of Radiology researchers Dennis Parker, Edward DiBella, Eugene Kholmovski, Rock Hadley and Chris McGann. Nassir Marrouche is the clinical cardiologist performing the ablations.

Parker, DiBella and Kholmovski, imaging specialists from the University of Utah's Center for Advanced Imaging Research, have developed new ways of using magnetic resonance imaging (MRI) to visualize the thin walls of the atria – a task previously considered nearly impossible in a beating heart. Marrouche and McGann, the cardiology team, recognized that the MRI images of the atrial walls varied among patients. The image processing team, led by MacLeod and other specialists at the U's Scientific Computing and Imaging Institute, worked on visualizing and quantifying these differences.

The results allowed the team to create a method to identify and measure regions of the heart most altered over time by atrial fibrillation, allowing them to determine which patients are most suitable for the ablation procedure. The discovery represents a potential breakthrough in treatment since previously there had not been an accurate way to determine suitability before an ablation.

The team also seeks to improve the technology to support ablation. Currently, ablations involve X-ray based fluoroscopy, ultrasound, MRI and electroanatomical mapping – but with little integration of images. The team aims to integrate the use of imaging technology, especially MRI, during ablation procedures. MRI offers the only noninvasive means to see the effects of ablation and follow patient progress during and after a procedure.

One fundamental goal is to understand how atrial fibrillation is developed. More research will allow better differentiation among subtypes of the disease, each of which might respond to different treatment approaches.

The University of Utah is constructing a state-of-the-art clinical suite that will make it a world leader in the use of integrated imaging for cardiac interventions. The one-of-a-kind suite will include fluoroscopy, computed tomography, intracardiac echo and MRI in one integrated area. Patients will be moved along a track between fluoroscopy and MRI areas as images are fused and updated in real-time.
Powered by Gantry Framework
Copyright © 1998 - 2022 Scientific Computing and Imaging Institute