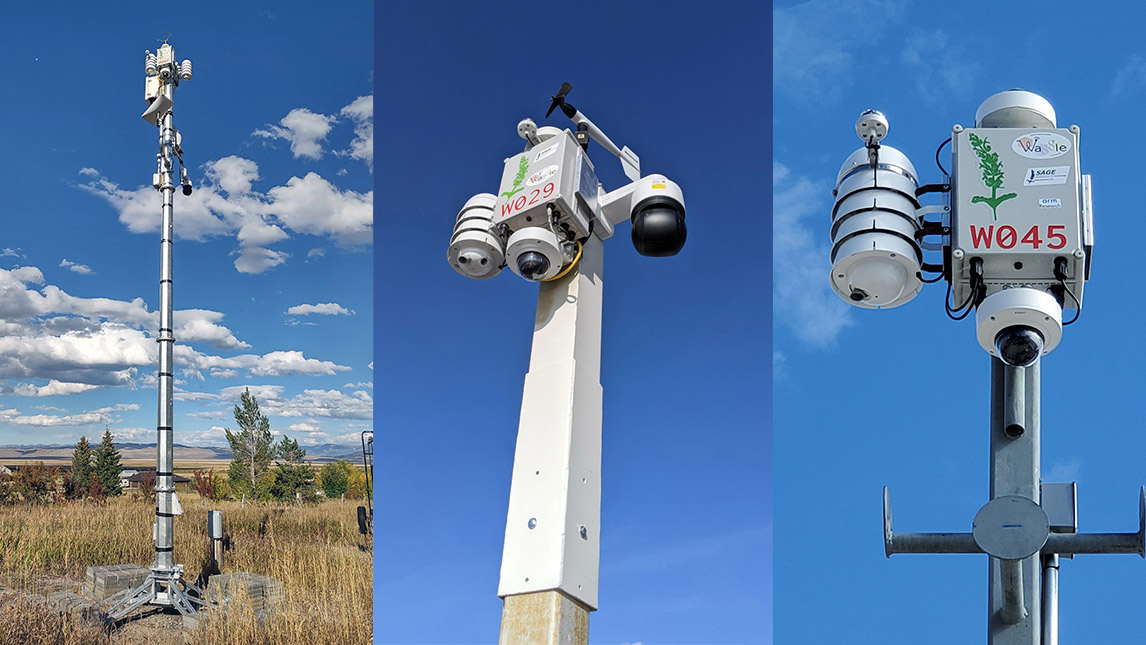 Smokey Bear is mostly right—you can help prevent wildfires—but it’s not all on you. Using fire-resistant building materials, establishing vegetation-free “ignition zones,” and avoiding fire-related activities when it’s hot, dry and windy are actions that, ideally, we all can take.

The scientific community, too, has a preventive role to play around natural disasters, urbanization and climate change. Recent advances in this area, like attempts to predict fire behavior before it becomes unmanageable, are the result of an ambitious project to build a continent-wide network of intelligent sensors that monitor environmental changes.

The Sage project, of which the University of Utah is a partner institution, is a $9 million National Science Foundation (NSF)-funded initiative launched in 2019 and led by researchers at Northwestern-Argonne Institute of Science and Engineering (NAISE), a collaboration between Northwestern University and the U.S. Department of Energy’s Argonne National Laboratory. Other Sage partners include the University of Colorado, the University of California-San Diego, Northern Illinois University, and George Mason University.

“Sage is a next-generation software infrastructure that’s flexible enough to accommodate both urban and environmental monitoring,” said Dan Reed, professor of computational science at the U; chair of the National Science Board, the NSF’s policymaking body; and the Sage project’s chief architect.

Manish Parashar, director of the U’s Scientific Computing and Imaging (SCI) Institute, meanwhile, is overseeing an effort to write code for scheduling and analysis functions on the three U-maintained sensor nodes—one at the Taft-Nicholson Environmental Humanities Center in Lakeview, Montana; one atop 102 Tower in downtown Salt Lake City; and one on the roof of the Rio Tinto Center, which houses the Natural History Museum of Utah (NHMU).

When Reed presented the project to the U’s Council of Academic Deans, NHMU Executive Director Jason Cryan said he “immediately put up my hand to offer NHMU as a potential first installation site for Utah.”

The idea behind Sage is to move advanced machine learning algorithms to “edge computing.” The traditional method involved deploying sensors and collecting data later. Previous systems might save data on hard drives retrieved from sensors a few times a year or upload only a fraction of data to a cloud server through a slow wireless connection. Edge computing, however, allows data to be analyzed and measured almost immediately, by instruments near or at the data collection site. Sage devices, Reed explained, process images, sound, vibration and other data to create measurements that can’t be as easily obtained from conventional sensor networks.

Primarily funded by the NSF, AoT was a collaborative effort among scientists, universities, federal and local government, industry partners and communities to collect real-time data on urban environments. AoT was the brainchild of Charlie Catlett, a senior computer scientist in Argonne’s Mathematics and Computer Science (MCS) Division, Sage co-principal investigator, and Reed’s longtime friend and colleague.

Catlett’s vision was to create a “fitness tracker for the city”: a vast network of low-cost sensors placed throughout Chicago capable of measuring everything from urban heat islands to noise pollution.

“When you think about the way we’ve traditionally done social science, people go out and conduct surveys. When you survey people, they sometimes say what they think you want to hear,” Reed said. “It’s a little like your doctor advising you to eat a better-balanced diet and exercise more, which ends up being a promise most of us make and break the moment we leave the doctor’s office. With AoT, the idea became, instead of surveys, why don’t we just measure what really happens?”

Reed said getting the AoT project off the ground required a considerable amount of civic discussion over the acceptable use of data “because putting cameras up in the middle of the city doesn’t exactly inspire faith in the community.”

“One of the agreed-upon rules was that raw imagery would never leave the cameras, only derived and anonymized statistics,” Reed said. “The other realization was that the volume of data is too large to push back to the central site, so being able to do edge AI lowered the bandwidth requirements while allowing greater privacy.”

Sage cyber infrastructure links small, powerful computers directly to nodes, most of which feature high-resolution cameras (including a thermal camera), microphones, weather measurements and air quality sensors, and sends the information back to central servers. The distributed system allows researchers to analyze and respond to enormous amounts of data quickly, without having to transfer it all back to the laboratory.

Though Sage devices are intended to measure environmental changes locally and regionally, sensors are often sensitive enough to detect changes thousands of miles away. For example, Reed said Sage sensors detected the air pressure wave from a volcanic eruption in Tonga that produced the largest atmospheric explosion in recorded history.

In addition to U-maintained nodes, Sage technology continues to be tested in AoT environments; the University of California-San Diego’s WIFIRE project, which provides real-time wildfire prevention and response data at about 80 towers across southern California; and the NSF’s National Ecological Observatory Network (NEON), an array of hundreds of terrestrial and aquatic measurement sites across the United States that collects data on plants, animals, soil, water, and the atmosphere.

“NEON provides expert ecological data from sites across the continent to power the most important science being done today,” Reed said. “NEON is essential to tracking and understanding how human activities impact local flora and fauna as the environment has shifted.”

“The nodes have places where young people can plug in low-cost sensors of their own,” Reed said. “Just imagine students interacting with this technology, too, getting excited by the notion that they can do real science, write code, build sensors and capture data in real-time, instead of just reading examples in a textbook.”