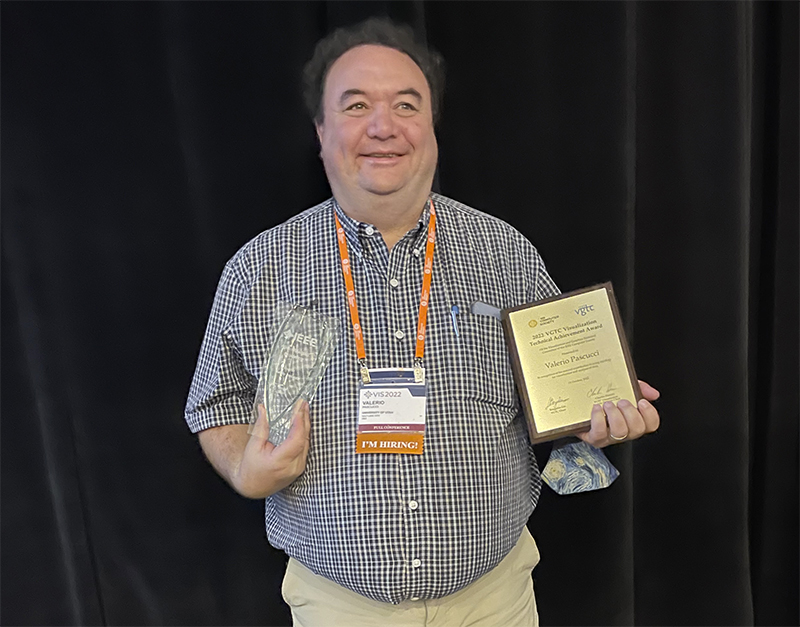 The 2022 VGTC Visualization Technical Achievement Award goes to Valerio Pascucci for his seminal contribution in using topology for visualization and analysis of data.

Valerio Pascucci is the John R. Parks Inaugural Endowed Chair of the University of Utah, a Professor of Computer Science in the School of Computing, a faculty member of the Scientific Computing and Imaging Institute, and the Founding Director of the Center for Extreme Data Management Analysis and Visualization (CEDMAV) at the University of Utah. He received a Ph.D. in computer science from Purdue University after moving from Italy to the US. Valerio’s Ph.D. research was titled “Multi-dimensional and multi-resolution geometric data-structures for scientific visualization” and investigated the effective use of visualization techniques to enable the interactive, intuitive exploration of big scientific data.

Valerio has pioneered the effective use of topological analysis for visualization and analytics for many different types of data, including scalar fields, vector fields, and high dimensional data with applications ranging from clean energy and climate modeling to cosmology and nuclear engineering. Valerio's topology research started in 1998 (as a Ph.D. student) with his work on "Visualization of scalar topology for structural enhancement" presented at the IEEE VIS conference (formerly SciVis, InfoVis, and VAST) where he has continued to publish every single year for over 25 years. This body of work has been recognized with seven Best Paper Awards and the 15-year Test of Time Award for his 2002 SciVis paper on "Efficient computation of the topology of level sets." Overall, Valerio published 6 edited books and over 250 refereed papers (107 in journals, 129 in conferences proceedings, and 25 as book chapters) that involve a breadth of the work including the theoretical foundations of topological data analysis, its robust implementation in software packages, and its direct use in science and engineering. In addition to topology, Valerio has focused a major portion of his research on the development of techniques to manage and visualize massive scientific data. The results have been mainly implemented in the OpenVisus library (visus.org) and deployed via the National Science Data Fabric initiative.

Valerio's work has been used in several commercial applications, such as in the oil and gas industry, to better understand and label seismic data, in the aerospace industry, to design new light materials with improved performance, and in agriculture, to facilitate fast collection of massive data sets from drones. Valerio's work also led to significant outreach activities, including the presentation of the topological analysis of combustion simulations in a year-long (2018-2019) Exhibit of Fire at the top museum of science in Europe (Cité des Sciences in Paris) and the live demonstrations of virtual reality neuroscience tools at the Leonardo Museum of Science in Utah (2019-2020).

Valerio’s devotion to teaching and mentoring was recognized with the 2016 Distinguished Mentor Award from the Graduate School of the University of Utah for introducing topology methods and visualization techniques in the classroom and for advising and supporting many Ph.D. students and postdocs.

Valerio Pascucci has demonstrated exemplary service to the visualization community. As a general chair of IEEE VIS 2020, he navigated successfully through the COVID-19 pandemic, turning it into an opportunity to grow the conference's reach to an unprecedented number of community members. Valerio also served twice as an Associate Editor of the IEEE TVCG journal and organized seven other major meetings: IEEE eScience 2022, ACM SoCG 2010, TopoInVis 2013 and 2009, IEEE Volume Graphics 2008, Dagstuhl Perspective Workshop 2014, ACM SIGHPC Workshop on Visual Performance Analysis (with SC14) 2014.

Outside of his main academic job, Valerio is the founder of Data Intensive Science, a 501(c) nonprofit providing outreach and training to promote the use of advanced technologies for science and engineering, he is the Founding President of ViSOAR LLC, a University of Utah spin-off, and he is a co-founder of Leggera Romana, a Utah corporation whose mission to popularize gourmet Pinsa, the roman ancestor of pizza, outside Italy.
Login | Admin
Copyright © 1998 - 2022 Scientific Computing and Imaging Institute
SCI