Both Sides of The Brain 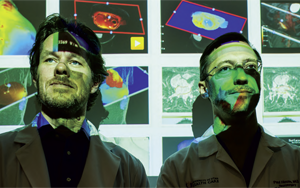 It sounds like something straight from a scene in a science fiction film: Surgery that places a set of wires under the skull so that electrical signals can be transmitted to different areas of the brain. It's called DBS, or deep brain stimulation. And if the idea of it seems a bit wince-inducing or scary, then understanding the power of what it can do - quiet the tremors associated with Parkinson's disease and other brain disorders - will likely wash away any patient's fears.

"What I tell patients about the fear part is this: This is not new or experimental brain surgery...more than 100,000 of these procedures have been done," says Paul House, MD, a neurosurgeon and the surgical director of University of Utah Health Care's Movement Disorders Program.

"We know DBS does not change the progression of Parkinson's disease, but it does improve people's quality of life after they have it," says House, who himself has done more than 400 of the surgeries here at University of Utah Health Care (UUHC). "They get more years of doing better."

Over the past eight years, an interdisciplinary team led by neurologist Lauren Schrock, MD, and Dr. House, have worked to set UUHC's Movement Disorders Program apart as one of the nation's premier DBS clinical treatment centers. It's the largest program of its kind in the Intermountain West, with some of the best patient outcomes, says Dr. House. Nationally, UUHC ranks in the top 15 for number of annual DBS procedures.

FDA approved in 1997, DBS involves the surgical implantation of a neurostimulator device - a sort of brain pacemaker - into the chest along with a set of wires, known as leads, which together send electrical impulses to various parts of the brain in order to activate brain circuits. This can alleviate the symptoms associated with movement disorders, most commonly Parkinson's, essential tremor, and dystonia.

The device is programmable, so the level of electrical stimulation can be controlled and optimized for individual patient needs both after the initial surgery and as the disease progresses. And unlike other, more traditional forms of brain surgery, DBS causes no injury to the brain, which in the future may allow for expanded applications to other types of movement disorders, House says.

While DBS cannot cure Parkinson's disease or other disorders, the improved quality of life in wellselected patients is profound. Outcomes are so good, in fact, that the word-of-mouth patient experience has become a major source of referrals, he says.

Dr. House is particularly proud of the interdisciplinary approach to diagnosis and treatment, which has developed so that patients get the right screening ahead of surgery to ensure that those who get the procedure are the best possible candidates.

After surgery, the same is true. A team of health care professionals - from neurosurgeons and neurologists to nurses and physical therapists - work with patients to determine how they feel and whether their DBS stimulation level is on target and producing the maximum benefit.

"This is really translational medicine at its best," Dr. House says. "We are building on well-established clinical therapies that are still relatively new and trying to get to the next step with researching new ideas for therapies.

"Because we have that team together, we get to talk about new ideas, nuances and limitations that frankly we might not be fully aware of without each other," says Dr. House.

The program has also sought to enhance the University of Utah's clinical work with research that breaks new ground both in understanding movement disorders and exploring ways in which technology and science can improve disease treatment.

To that end, in summer 2014, the program hired Christopher Butson, PhD, as its director of neuromodulation research. An expert in neurostimulation devices and neuromodulation therapy, Dr. Butson came to Utah from the Biotechnology and Bioengineering Center at the Medical College of Wisconsin in Milwaukee.
He says he chose UUHC over others because he believed Utah provided the best environment for advancing his research, the goal of which is to use neurostimulation therapy to improve the lives of patients with a range of neurological and psychiatric disorders.

Another key factor in Dr. Butson's decision: data. UUHC has an extensive computational infrastructure that is the raw material for much of his work. Much of those rich details were not - but now will be - mined for contributions to new discovery and innovation.

"The one thing we aspire to do in my lab is create and achieve insights that would be difficult to achieve otherwise," he says.

One of Dr. Butson's most promising ideas: an iPadbased interactive computer program that creates a three-dimensional picture of the brain. This provides clinicians with a better look at a patient's brain and helps them make better predictions about DBS lead placements, stimulation settings and effects. It also saves time. Clinicians who used the program in a small study reduced their patient evaluation time by 99 percent.

The program, which allows for simulated stimulation of the brain's circuits, may eventually help enhance the precision of surgical targets and DBS treatment for a multitude of disorders and diseases. It's something that until recently couldn't really be done, but has been made possible by advances in medical imaging technology - another area of research that UUHC helped advance.

"Where the field is going is toward circuit-based therapy... and we hope that 3D modeling will allow us to see this in a totally different way," Dr. Butson says. "So integrating the best information we can get from all different types of imaging and incorporating that into predictive models... this is the bleeding edge of DBS research."
Login | Admin
Copyright © 1998 - 2022 Scientific Computing and Imaging Institute
SCI