U of U team finishes study of massive, mysterious explosion 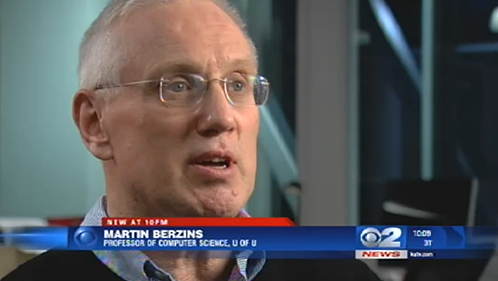 (KUTV) A team of researchers from the University of Utah is wrapping up an exhaustive five-year study looking into a mysterious explosion of a semi-truck in Spanish Fork Canyon back in 2005.

The truck was packed with 35,000 pounds of mining explosives. It blew up after the truck rolled over, leaving a massive crater, 70-feet wide and 30-feet deep.

There were no fatalities but explosions like the one that happened on Aug. 10, 2005 are extremely rare. But the team of researchers is determined to prevent this type of incident from happening again.

"We realized we didn't understand why this happened and we wanted to investigate the mechanisms behind it," says Martin Berzins, a professor of computer science at the University of Utah.

Berzins and his former colleague, Chuck White were awarded a $1-million grant by the National Science Foundation.

"We were able to spread that money out over the five years that it needed to solve a very challenging problem like this," says Berzins.
Until now, there was no plausible explanation for why the explosives detonated.

"One idea is that our explosives kinda moved into one another and formed an inertial confinement or a barrier of high-density explosives," said Jacqueline Beckvermit, a PhD student, whose spent most of her college career researching this event. She believes an extreme change in pressure caused the explosives to detonate.

"It's very exciting to me to think that I could be making a change in the world."

The Department of Energy provided some of the world's largest computers, so the team could re-enact the environment inside the trailer on that day.
The computers have also enabled researchers to find safe alternatives, to prevent this from happening again.

One idea is to pack explosive cases with spaces in-between to allow more space and reduce pressure. "It did not detonate and we don't think it will detonate with this [new] configuration," says Beckvermit.

The team's research is now being published and released.

"We do more than just solve this problem, we've produced computer software that can be used to solve many other problems."

Berzins says they've been sharing their findings with the Department of Transportation in pursuit of policy changes for hauling explosives.