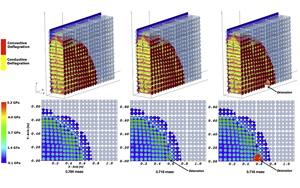 In 2005, a semi-truck hauling 35,000 pounds of explosives through the Spanish Fork Canyon in Utah crashed and caught fire, causing a dramatic explosion that left a 30-by-70-foot crater in the highway.

Fortunately, there were no fatalities. With about three minutes between the crash and the explosion, the driver and other motorists had time to flee. Some injuries did occur, however, as the explosion sent debris flying in all directions and produced a shock wave that blew out nearby car windows.

Such accidents are extremely rare but can obviously have devastating results. So understanding better exactly how such explosions occur can be an important step to learning how better to prevent them.

The cause of the massive blast on the Utah highway, brought on by a process called deflagration-to-detonation transition (DDT), posed something of a mystery. The semi-truck was transporting 8,400 cylinders of explosives intended for blasting operations in the mining industry. Despite the cargo’s volatile nature, it was not supposed to detonate violently as it did.

In the case of an accidental fire, the explosive cylinders were supposed to burn rapidly in a type of combustion called deflagration. Limited by heat transfer, deflagration events spread at a velocity lower than the speed of sound. Detonation, on the other hand, occurs when the combustion spreads at a supersonic rate and triggers a high-pressure shock wave.

Researchers from the University of Utah are using supercomputing resources at the Argonne Leadership Computing Facility (ALCF), a DOE Office of Science User Facility, to recreate the 2005 explosion virtually. Led by Professor Martin Berzins, the research team is performing large-scale 3D simulations on Mira, the ALCF’s 10-petaflops IBM Blue Gene/Q system, to study the physical mechanisms that led to DDT.

“Ultimately, we hope our research will result in strategies that can prevent accidents like the one we are studying,” Berzins said.

“The main focus of our simulations is to determine why the fire escalated to detonation,” said Jacqueline Beckvermit, a PhD student and research assistant at the University of Utah.

While the real-world accident only took a few minutes to transition from deflagration to detonation, achieving virtual detonation required considerable time and effort.

“We set out to simulate one-eighth of the actual semi-truck with the explosives in their original packing configuration, but it was not an easy feat,” Beckvermit said. “After two years of work and more than 100 million computing hours, we finally reached detonation this fall.”

The simulations were a challenge due to the complex nature of DDT, which involves several strongly correlated processes, such as chemical kinetics, pressure waves and turbulence, all occurring in multiple spatial and temporal scales.

To achieve the high spatial and temporal resolution needed to carry out the multiscale, multiphysics simulations, the University of Utah research team optimized their highly scalable Uintah Computational Framework to take advantage of Mira's petascale power. This involved leveraging the massively parallel capabilities of Uintah to develop a robust reaction model capable of simulating the different modes of combustion at large scales.

The researchers recently achieved detonation with 3D simulations that ran on a significant portion of Mira’s 786,342 cores. They are also working to scale up Uintah to run on the entire supercomputer as a means to achieve even higher fidelity results in the future.

“We’re not quite to the point of doing production-level runs on the full machine, but we have completed proof-of-concept calculations to show that we can scale and take advantage of virtually all of Mira’s cores,” said John Schmidt, co-principal investigator and adjunct assistant professor at University of Utah.

Thus far, the team’s simulations have led them to two possible mechanisms for DDT in large arrays of explosives. One hypothesis points to inertial confinement, a process in which damaged cylinders of explosives form a barrier that traps product gases, creating a pocket of high pressure that could initiate DDT. The other proposed mechanism involves a shock-to-detonation transition caused by the impact of explosive cylinders colliding in a high-pressure environment. But more analysis is required before these theories can be confirmed or rejected.

In addition to investigating why DDT occurred, the researchers are using Mira to examine how different packing densities and configurations could be used to prevent such explosions.

“The ultimate goal of our project is to propose ideas on how to package explosives for transport to make sure accidents like this don’t happen anymore,” Beckvermit said.

This work coincides with an ongoing National Science Foundation PetaApps project aimed at using simulation science to explore ways to use the Uintah Computational Framework to solve problems in public health and public safety.

The project received computing time at the ALCF through the DOE Office of Science’s Innovative and Novel Computational Impact on Theory and Experiment (INCITE) program.

The Office of Science is the single largest supporter of basic research in the physical sciences in the United States, and is working to address some of the most pressing challenges of our time.  For more information, please visit science.energy.gov.
Login | Admin
Copyright © 1998 - 2022 Scientific Computing and Imaging Institute
SCI