ViSUS: One billion polygons to billions of pixels 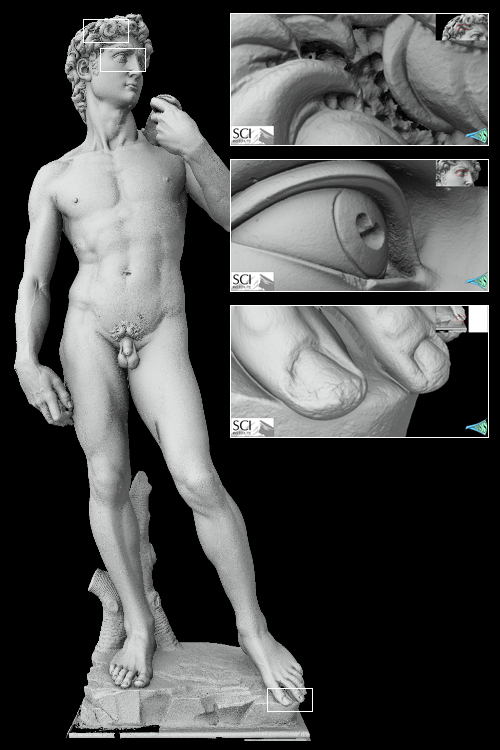 SCI announces the first gigapixel, multi-view rendering of The Digital Michelangelo Project's David.The David model consists of 933 million triangles from a laser-scan of the original statue created by Professor Marc Levoy and members of The Digital Michelangelo Project at Stanford university. The model was aligned by Benedict Brown and Szymon Rusinkiewicz using the non-rigid alignment method described in their 2007 SIGGRAPH paper.

Each of the 4 2-gigapixel sized frames (29280 x 70416 pixels) was rendered using the Manta Interactive Ray Tracer. Manta is a highly portable interactive ray tracing environment designed at the SCI Institute to be used on both workstations and super computers. For these renderings, Manta leveraged a recursive 4-level grid to accelerate the rendering. In all, each frame took 30 hours to render using 64 cores each (256 total) of the SCI Institute's 264 core SGI UV 1000 with 2.8TB of RAM and 2.67GHz Intel Xeon X7542 cores.

The final rendering was stored in the hierarchical, space-filling curve format of the ViSUS technology. ViSUS intelligently reorganizes the raw data enabling efficient, streaming pipelines that process the information while in movement.  The results are then visualized in a progressive environment allowing for meaningful explorations with minimal required resources.  This technology enables real-time management of large datasets on a variety of systems ranging from desktops and laptop computers to portable devices such as iPhones/iPads.  ViSUS has been deployed in a variety of large data applications such as the monitoring of large scientific simulations and the editing of massive images and panoramas.

The ViSUS David viewer is currently available as a Windows web browser plugin (Firefox and Chrome) or as a standalone application for Windows, Max OS X, or OpenSUSE.  Please follow the links below to access the gigapixel David.