Atrial fibrillation (AF) is the most common—and perhaps most insidious—form of heart rhythm disturbance and treating it has become the focus of a group of bioengineers, imaging physicists, and physicians at the University of Utah.

In atrial fibrillation, the upper two chambers (the left and right atria) of the heart lose their synchronization and beat erratically and inefficiently. The same condition in the lower chambers (ventricles) of the heart is fatal within minutes and defibrillators are necessary to restore coordination. In the atria, death is by stealth and occurs over years, which is both good news and bad. 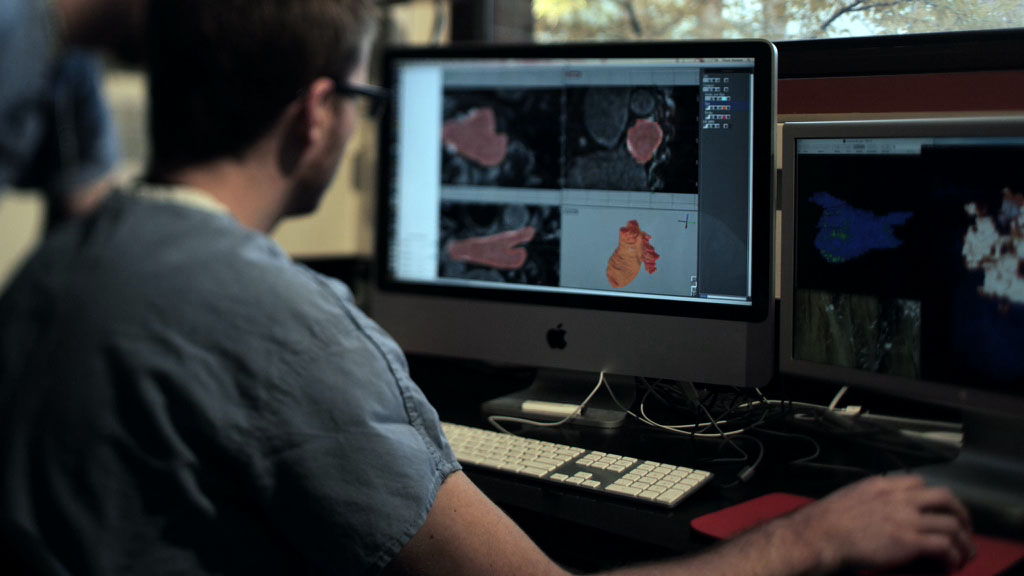 Because it is not immediately fatal, there is time to treat atrial fibrillation–but also time to ignore it. While it is not immediately life-threatening, AF does immediately reduce the pumping capacity of the heart and elevates the heart rate of the entire organ. Patients cannot be as physically active as they often wish but many adjust to the symptoms and live with the disease untreated for many years.

Untreated atrial fibrillation, however, has long term dangers that we are only just grasping fully. AF results in a dramatic rise in stroke, the third most common cause of death in the United States. AF not only increases the likelihood of stroke (15% of all strokes are the result of AF), but also worsens the results of a stroke when it occurs. Treatment of AF represents a significant health-care burden ($17 billion/year) with a mean lifetime cost from AF related stroke estimated to be $140,000 per patient. AF now affects 2.5 million Americans and is predicted to afflict over 5 million by 2050.

A group of scientists and physicians are the University of Utah is addressing the growing problem of atrial fibrillation through a combination of high tech interventional therapy, multimodal medical imaging, image processing and analysis, and computer science.

This form of treatment is known as "atrial ablation" and requires that large areas of the posterior wall of the left atrium be rendered electrically inactive. This part of the heart is the origin of the fibrillation and by suppressing its electrical activity, the heart can return to—and, more importantly, stay in—normal rhythm. To carry out ablation, the physician, under image guidance, places a catheter in the left atrium and uses it to apply radiofrequency (RF) energy to heat a series of small spots, called "lesions" on the atrial wall.

Although atrial ablation is the only intervention that can permanently suppress atrial fibrillation without the use of supplemental drugs (which are required for the lifetime of the patient), its use is currently limited. Ablation is currently applied less than 0.1% of AF patients, even though it can achieve success rates as high as 70–80%. Many of the reasons for such limited use are technical. The procedure is difficult to execute well and requires manual integration of information from many sources to follow a moving target at millimeter accuracy with a device that could burn through the entire heart is applied to the wrong place for too long.

The interdisciplinary team trying to improve the success and safety of atrial ablation contains a range of expertise. Dr. Nassir Marrouche is the clinical cardiologist who carries out the ablations. Dr. Marrouche came to the University of Utah just over a year ago and has been the catalyst for the entire project. He brought together a collection of bioengineering, cardiology, and radiology researchers that includes Drs. Rob MacLeod, Edward Hsu, Dennis Parker, Ed DiBella, Eugene Kholmovski, Rock Hadly, and Chris McGann, all with the shared goal of treating AF.

Medical imaging is at the "heart" of this project as it plays a role at all stages. The imaging specialists Drs. Parker, DiBella, and Kholmovski, all from the Utah Center of Advanced Imaging Research (UCAIR), have developed new ways of using magnetic resonance imaging (MRI) to visualize the walls of the atria, which are only a few millimeters in thickness, a task previously considered almost impossible in a beating heart. The cardiology team, Drs. Marrouche and McGann, then recognized that the MRI images of the atrial walls of some patients looked different from others and set the image processing team, Dr. MacLeod and specialists at the Scientific Computing and Imaging (SCI) Institute, the task of visualizing and quantifying these differences.

The results were striking and allowed the team to create a method that appears to identify and measure regions of the heart that are most altered by the atrial fibrillation. The resulting index, based on the extent of fibrosis in the atrial wall, can serve to differentiate between good and bad candidates for treatment. A patient with a high score in this index makes a poor candidate for ablation, most likely because the AF is of such long standing. Patients with a low index, on the other hand, have a higher likelihood of success with ablation therapy. This discovery represents a potential breakthrough in treatment as there is no other way to determine suitability of patients before the procedure. 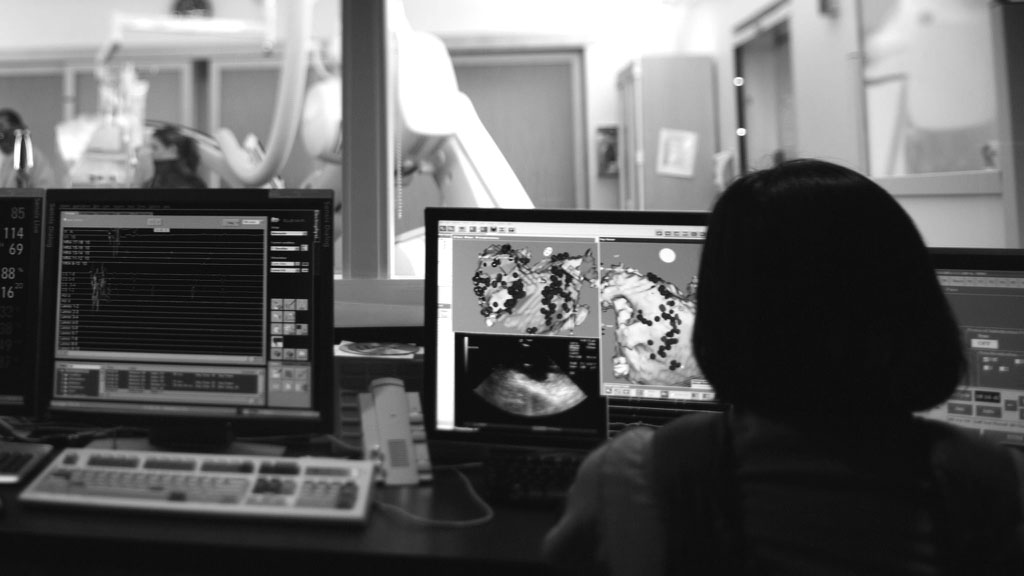 New innovations in imaging and image processing will also be necessary for improvements in the technology to support ablation. Currently, physicians use a combination of modalities that are only beginning to be integrated. Each modality—X-ray based fluoroscopy, ultrasound, MRI, and electroanatomical mapping—contributes something to the procedure but the physician must perform the integration of these contributions with little or no technical support.

The Utah team aims to transform the integration of imaging modalities and especially the role of MRI during the ablation procedures. MRI is the only modality capable of seeing the effects of ablation and thus has the potential to monitor the formation of the lesions that suppress unwanted electrical activity. MRI can also provide images of the lesions as they progress from acute injury to stable scars and thus offers the only noninvasive means to follow patient progress during the procedure and in the following weeks and months.

To provide the environment in which to create this integration of imaging, the University of Utah is constructing a state of the art clinical suite that will include fluoroscopy, computed tomography, intracardiac echo, and MRI in one integrated area. Patients will move along a track in the floor between the fluoroscopy and MRI areas (the two technologies cannot yet exist in the same scanner) and images from both systems will be immediately fused and then updated in real time as the patient undergoes ablation. This suite will be unlike any in the world at this time and will make the University of Utah a world leader in the use of integrated imaging for cardiac interventions.

The basis of advances in clinical medicine is always solid scientific exploration and this project also has the the goal of understanding the fundamental mechanisms of atrial fibrillation. Drs.MacLeod, Hsu, and Marrouche all seek to use experimental, imaging, and computational methods to characterize the development of atrial fibrillation from early onset to chronic entrenchment. It becomes progressing more difficult to bring patients out of AF the more months and years they spend in this condition and some of the factors involved may even be reversible. More generally, the taxonomy of the disease is poorly developed and only basic science will allow better differentiation among subtypes of the disease, each of which might respond to different treatment approaches.

The project has so far captured a great deal of attention from industry and most of the financial support for the experiments and research comes from companies like Siemens Medical, Surgivision, and Biosense Webster (Johnson & Johnson). The University of Utah School of Medicine has also thrown its support behind the project through its commitment to construct the integrated clinical suite that will support both research and clinical application of the results of this project. Public funding from the NIH takes longer to mobilize and multiple grant applications are in all stages of development and evaluation. The hope of the group is to create effective private/public partnership that will allow for rapid translation of ideas from the lab to the treatment of patients.

The interdisciplinary nature of the research teams also means that many departments are involved but the project is a perfect reflection of modern bioengineering. Drs. MacLeod and Hsu, for example, have primary appointments in Bioengineering but all hold secondary appointments in other related disciplines (Cardiology and Radiology) while Dr. DiBella has a primary appointment in Radiology and secondary in Bioengineering. The University of Utah and especially the Department of Bioengineering stand above many other institutions in creating fertile conditions for interdisciplinary projects like this one, in which the whole can be more than the sum of its parts.
Powered by Gantry Framework
Copyright © 1998 - 2020 Scientific Computing and Imaging Institute