Introduction
Acute myocardial ischemia occurs when coronary perfusion to the heart is inadequate, which can perturb the highly organized electrical activation of the heart and can result in adverse cardiac events including sudden cardiac death. Ischemia is known to influence the ST and repolarization phases of the ECG, but it also has a marked effect on propagation (QRS); however, studies investigating propagation during ischemia have been limited.

Methods
We estimated conduction velocity (CV) and ischemic stress prior to and throughout 20 episodes of experimentally induced ischemia in order to quantify the progression and correlation of volumetric conduction changes during ischemia. To estimate volumetric CV, we 1) reconstructed the activation wavefront; 2) calculated the elementwise gradient to approximate propagation direction; and 3) estimated conduction speed (CS) with an inverse-gradient technique.

Results
We found that acute ischemia induces significant conduction slowing, reducing the global median speed by 20 cm/s. We observed a biphasic response in CS (acceleration then deceleration) early in some ischemic episodes. Furthermore, we noted a high temporal correlation between ST-segment changes and CS slowing; however, when comparing these changes over space, we found only moderate correlation (corr. = 0.60).

Discussion
This study is the first to report volumetric CS changes (acceleration and slowing) during episodes of acute ischemia in the whole heart. We showed that while CS changes progress in a similar time course to ischemic stress (measured by ST-segment shifts), the spatial overlap is complex and variable, showing extreme conduction slowing both in and around regions experiencing severe ischemia.

Objective: In this study, we have used whole heart simulations parameterized with large animal experiments to validate three techniques (two from the literature and one novel) for estimating epicardial and volumetric conduction velocity (CV). Methods: We used an eikonal-based simulation model to generate ground truth activation sequences with prescribed CVs. Using the sampling density achieved experimentally we examined the accuracy with which we could reconstruct the wavefront, and then examined the robustness of three CV estimation techniques to reconstruction related error. We examined a triangulation-based, inverse-gradient-based, and streamline-based techniques for estimating CV cross the surface and within the volume of the heart. Results: The reconstructed activation times agreed closely with simulated values, with 50-70% of the volumetric nodes and 97-99% of the epicardial nodes were within 1 ms of the ground truth. We found close agreement between the CVs calculated using reconstructed versus ground truth activation times, with differences in the median estimated CV on the order of 3-5% volumetrically and 1-2% superficially, regardless of what technique was used. Conclusion: Our results indicate that the wavefront reconstruction and CV estimation techniques are accurate, allowing us to examine changes in propagation induced by experimental interventions such as acute ischemia, ectopic pacing, or drugs. Significance: We implemented, validated, and compared the performance of a number of CV estimation techniques. The CV estimation techniques implemented in this study produce accurate, high-resolution CV fields that can be used to study propagation in the heart experimentally and clinically.

Accurate reconstruction of cardiac activation wavefronts is crucial for clinical diagnosis, management, and treatment of cardiac arrhythmias. Furthermore, reconstruction of activation profiles within the intramural myocardium has long been impossible because electrical mapping was only performed on the endocardial surface. Recent advancements in electrocardiographic imaging (ECGI) have made endocardial and epicardial activation mapping possible. We propose a novel approach to use both endocardial and epicardial mapping in a combined approach to reconstruct intramural activation times.

We used 11 simulations of ventricular activation paced from sites throughout myocardial wall and extracted endocardial and epicardial activation maps at approximate clinical resolution. From these maps, we interpolated the activation times through the myocardium using thin-plate-spline radial basis functions. We evaluated activation time reconstruction accuracy using root-mean-squared error (RMSE) of activation times and the percent of nodes within 1 ms of the ground truth.

We showed that a simple, yet effective combination of clinical endocardial and epicardial activation maps can accurately reconstruct intramural wavefronts. Furthermore, we showed that this approach provided robust reconstructions across multiple intramural stimulation sites. 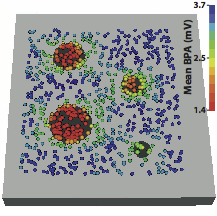 Background - Voltage mapping is an important tool for characterizing proarrhythmic electrophysiological substrate, yet it is subject to geometric factors that influence bipolar amplitudes and thus compromise performance. The aim of this study was to characterize the impact of catheter orientation on the ability of bipolar amplitudes to accurately discriminate between healthy and diseased tissues.

Methods and Results - We constructed a three-dimensional, in-silico, bidomain model of cardiac tissue containing transmural lesions of varying diameter. A planar excitation wave was stimulated and electrograms were sampled with a realistic catheter model at multiple positions and orientations. We carried out validation studies in animal experiments of acute ablation lesions mapped with a clinical mapping system. Bipolar electrograms sampled at higher inclination angles of the catheter with respect to the tissue demonstrated improvements in both sensitivity and specificity of lesion detection. Removing low voltage electrograms with concurrent activation of both electrodes, suggesting false attenuation of the bipolar electrogram due to alignment with the excitation wavefront, had little effect on the accuracy of voltage mapping.

Conclusions - Our results demonstrate possible mechanisms for the impact of catheter orientation on voltage mapping accuracy. Moreover, results from our simulations suggest that mapping accuracy may be improved by selectively controlling the inclination of the catheter to record at higher angles with respect to the tissue. 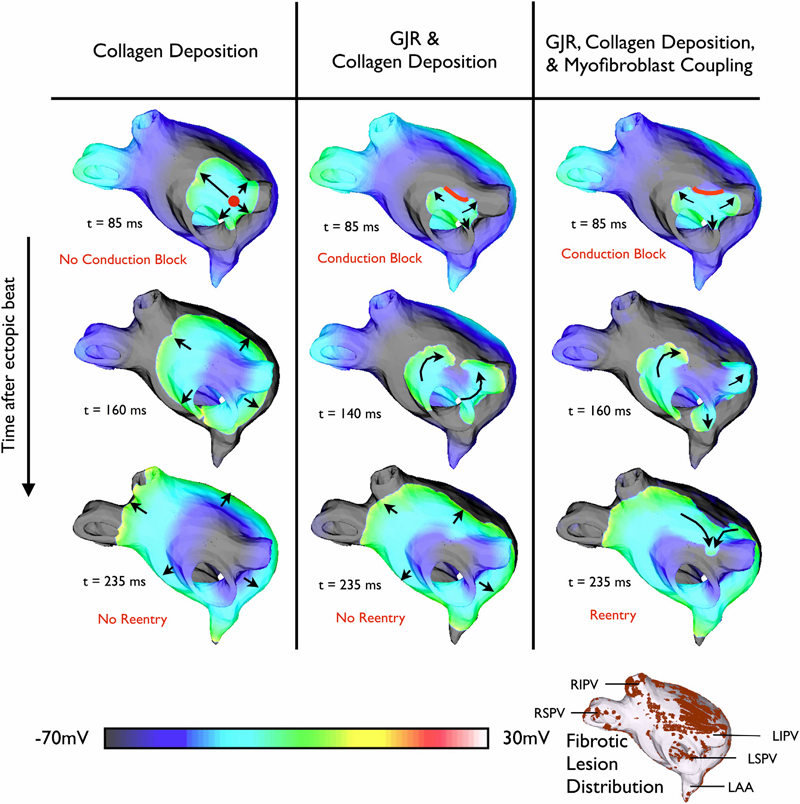 Atrial fibrillation (AF), the most common arrhythmia in humans, is initiated when triggered activity from the pulmonary veins propagates into atrial tissue and degrades into reentrant activity. Although experimental and clinical findings show a correlation between atrial fibrosis and AF, the causal relationship between the two remains elusive. This study used an array of 3D computational models with different representations of fibrosis based on a patient-specific atrial geometry with accurate fibrotic distribution to determine the mechanisms by which fibrosis underlies the degradation of a pulmonary vein ectopic beat into AF. Fibrotic lesions in models were represented with combinations of: gap junction remodeling; collagen deposition; and myofibroblast proliferation with electrotonic or paracrine effects on neighboring myocytes. The study found that the occurrence of gap junction remodeling and the subsequent conduction slowing in the fibrotic lesions was a necessary but not sufficient condition for AF development, whereas myofibroblast proliferation and the subsequent electrophysiological effect on neighboring myocytes within the fibrotic lesions was the sufficient condition necessary for reentry formation. Collagen did not alter the arrhythmogenic outcome resulting from the other fibrosis components. Reentrant circuits formed throughout the noncontiguous fibrotic lesions, without anchoring to a specific fibrotic lesion. 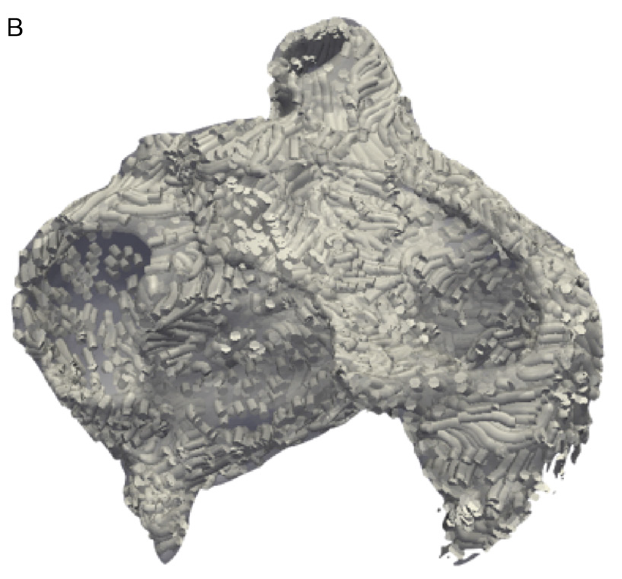 Personalized computational cardiac models are emerging as an important tool for studying cardiac arrhythmia mechanisms, and have the potential to become powerful instruments for guiding clinical anti-arrhythmia therapy. In this article, we present the methodology for constructing a patient-specific model of atrial fibrosis as a substrate for atrial fibrillation. The model is constructed from high-resolution late gadolinium-enhanced magnetic resonance imaging (LGE-MRI) images acquired in vivo from a patient suffering from persistent atrial fibrillation, accurately capturing both the patient's atrial geometry and the distribution of the fibrotic regions in the atria. Atrial fiber orientation is estimated using a novel image-based method, and fibrosis is represented in the patient-specific fibrotic regions as incorporating collagenous septa, gap junction remodeling, and myofibroblast proliferation. A proof-of-concept simulation result of reentrant circuits underlying atrial fibrillation in the model of the patient's fibrotic atrium is presented to demonstrate the completion of methodology development.