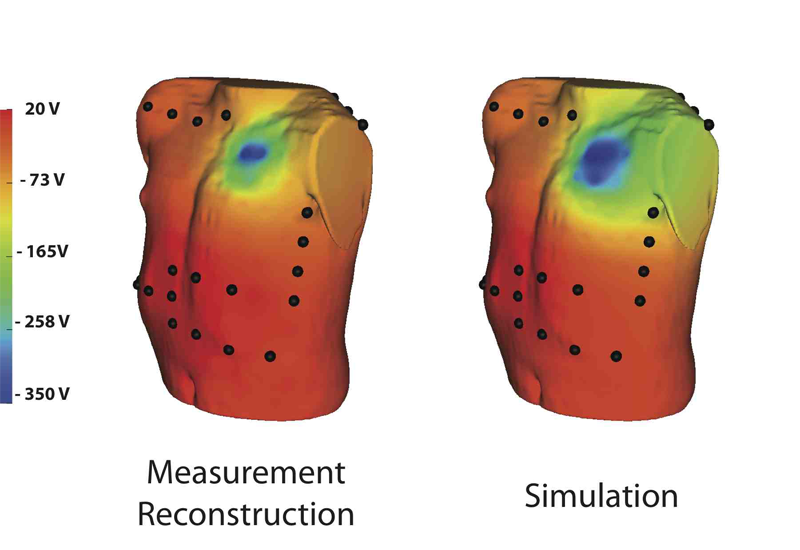 Despite the growing use of implantable cardioverter defibrillators (ICDs) in adults and children, there has been little progress in optimizing device and electrode placement. To facilitate effective placement of ICDs, especially in unique cases of children with congenital heart defects, we have developed a predictive model that evaluates the efficacy of a delivered shock. Most recently, we have also developed and carried out an experimental validation approach based on measurements from clinical cases. We have developed a method to obtain body surface potential maps of ICD discharges during implantation surgery and compared these measured potentials with simulated surface potentials to determine simulation accuracy.

Each study began with an full torso MRI or CT scan of the subject, from which we created patient specific geometric models. Using a customized limited leadset applied to the anterior surface of the torso away from the sterile field, we recorded body surface potentials during ICD testing. Subsequent X-ray images documented the actual location of ICD and electrodes for placement of the device in the geometric model. We then computed the defibrillation field, including body surface potentials, and compared them to the measured values.

Comparison of the simulated and measured potentials yielded very similar patterns and a typical correlation between 0.8 and 0.9 and a percentage error between 0.2 and 0.35. The high correlation of the potential maps suggest that the predictive simulation generates realistic potential values. Ongoing sensi- tivity studies will determine the robustness of the results and pave the way for use of this approach for predictive computational optimization studies before device implantation. 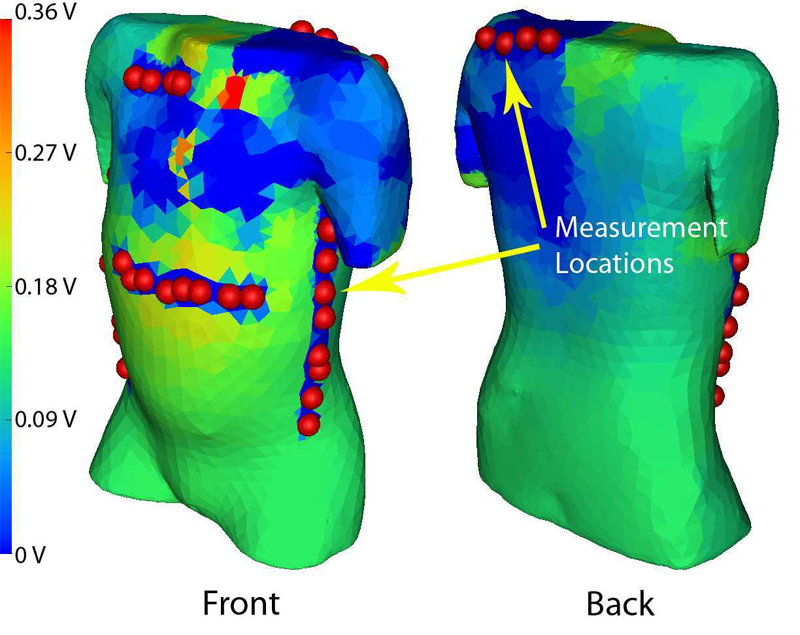 Implantable cardioverter defibrillators (ICDs) are increasing used in abnormal configurations. We have developed a patient specific forward simulation model to predict efficacy of the defibrillation shock. Our goal was to develop a method of measuring the ICD surface potentials as the devices are tested during implantation surgery to use as verification of the simulation. A lead selection algorithm was used to develop a surface potential mapping system with 32 recording sites that do not interfere with implantation surgery. ICD discharge recordings were compared at similar locations to corresponding patient models. The reconstructed simulated surface potentials showed
Powered by Gantry Framework
Copyright © 1998 - 2022 Scientific Computing and Imaging Institute