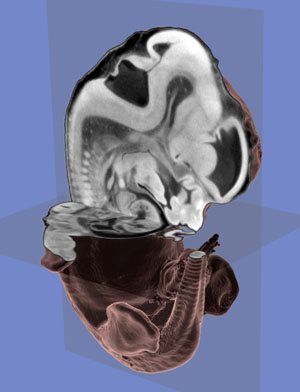 The Center is working aggressively in collaboration with the Charles Keller Laboratory to develop an advanced treatment protocol for the most common form of brain tumor affecting children, Medulloblastoma. These brain tumors form as a result of overgrowths of infant neuronal stem cells of the cerebellum. Nearly all children with medulloblastoma are treated with surgery, chemotherapy, and radiation. Radiation treatment is especially harsh on children under three years of age, for whom it often results in serious cognitive impairment. Unfortunately, in this young population, treatment, surgery and chemotherapy with no radiation typically has only a 34% survival rate. Better radiation-sparing treatments in younger patients are needed. Fortunately, promising research indicates the possibility to develop therapies based on targeting key cell growth factors and signaling molecules involved in the cancerous cell growth of medulloblastoma.1 The Center works closely with Dr. Keller and his team to provide the computational tools required to develop better treatment strategies that address the underlying biological causes of the disease and avoid the harsh side effects of current treatments.

The Keller Laboratory has developed a strain of laboratory mouse with a specific genetic flaw that results in the development of brain tumors precisely resembling medulloblastoma. These mice allow researchers to investigate the development of brain tumor cells and to test the effectiveness of treatments. The neuroscientists need a method to quantifiably measure the differences between normal brains and those affected by medulloblastoma, as well as those exposed to treatment. The proposed approach relies on 3D CT images of subject mice and the application of CIBC software tools, such as Seg3D, ShapeWorks, and ImageVis3D, for volumetric data analysis.2